Do you know that feeling – when you ride a track just the second time n your life- and things out of nothing seem familiar. You rember that mountain, the shalecovered traditional house across the street, the butchery with the funny name or even the feeling of riding that powerful unit of engine, frame, wheels and driver through everlasting curves and bends with hardly any traffic on.
And even going back to the other end of the city of “Rainfall “ left the same smile on my face, as when I passed the spot for the first time a couple of months ago. So the big hellos meeting Moni and Manfred in Struppen again felt even more familiar. The couldn´t be a better mirror of what results from overcoming longtime overdue borders , that were put up by politicians – not by the people. As a German-German-lovestory their warm hospitality kind of represents the good, that could only result from the daring changes in eastern Europe – and that was and is , what the Wind of Change was all about.
As much as the Ride-Of-Change followed the wind´s traces, to see where all the great ideas of the early nineties had been taken. And let us tell you – if it had not been for that – we would have made all the way through Saxonia for Manfred’s trout cooking – this was the ultimate Struppen experience from a gourmet´s point of view. Forget about 5-star-famous-celebrity-fancy-restaurants . If you can have such a dinner with friends near you and your bikes next to you ! And not to forget why people meet – though this might have happened anywhere – it happened for real riding a bike.
Another stunning symbol for peace and forgiving was next days visit to the city of Dresden.
Lots could be said and written about the city´s early and late history, its scenic baroque places and cites – all that has been shown, mentioned and described far more detailed and sophisticated, than this could ever be done here.
What again impressed us deeply within all that Dresden was , is and will be, was to see the rebuild “Frauenkirche”. Bombed as senseless as any other bombed place in this world, this was a longtime memorial of reckless political ignorance and stupidity. How much more it has become a symbol for the “Spirit of the Common Man” – rising out of the ashes by a worldwide support of people expressing their will, to never allow this again. Though tourists inside tend to behave more than rude and reckless to a religious place ( that is why you do not see a single inside picture of the church here ) – it was and still is a breathtaking view , to see all the craftsmanship of the past being rebuild by the generous skills of those people , who have learned about mutual tolerance from the past. 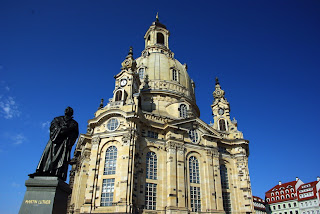 As if this was not impressive enough , I got another , very personal déjà-vu right in front of the Frauenkirche. When I was a very small boy , my grandparents gave me a brass statue as a present. I then would not know, who was that man with mild, but serious looking eyes holding a thick book in his left arm. He stood on a columnlike base, inscriptions were on that base and the portraits of some other serious looking men . All I realized was the built in musical clock, sending me to sleep every night of my small childhoodyears . Well it was my brother to break this by firing my statue out of our bunkbed some day. The spring was broken, but my special relationship to that man on the pedestal stayed intact . The man I write and talk about is Martin Luther. 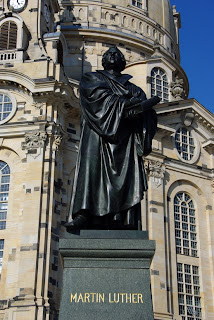 Growing older I learned more about the historic role he played , not only in Germany´s , but also the Eúropean and somewhat the world´s history. And if there was one thing for me to learn from his behaviour for my own live, that was to be authentic, have an opinion and stand for what you say and do. Even if this does not result in your personal advantage. Be a man – and do what you have to do !Like it or not. 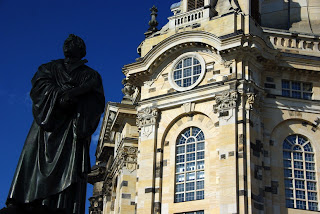 Imagine my surprise, leaving the “Frauenkirche” and facing exactly that Martin Luther statue that so much accompanied my little boys life. Of course mine was a copy of this one – but if you had asked ma as a boy, I would have convinced you , that this was big copy of what stood next to my bed. Boys will be boys- say it ain´t so…?!
But his was just a start to more good Dresden experiences. Including we met Petras friends Dani and Robi, met the local people on and off the scene, toured Dresden at night with Moni and Manfred . Get some Dresden impressions here.... 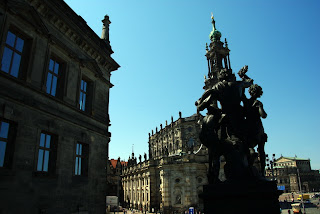 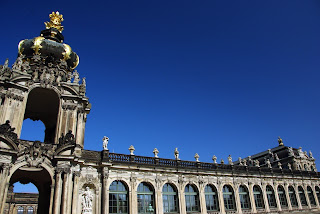 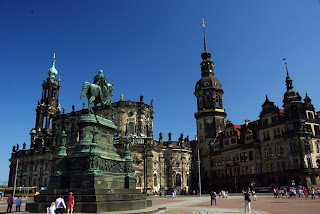 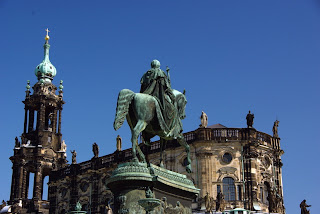 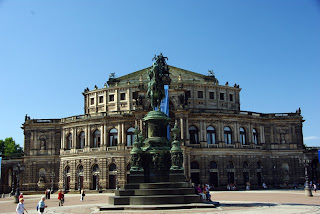 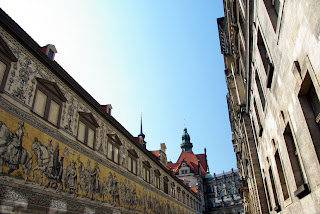 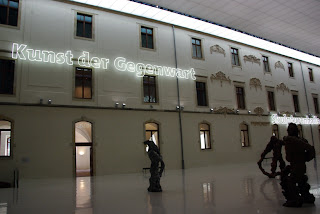 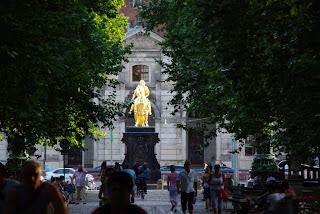 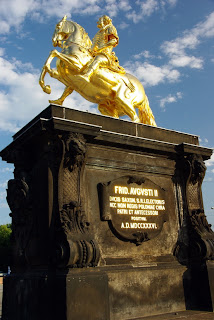 After we had said goodbye to our Struppen friends Manfred and Moni we toured on up the Elbe river – to meet Petras friend Wolfgang . Him being a Ducatista and KTM-Biker he spends the summer up in the Elbsandstein Mountains to restore a house near the river . That is where we headed for the next night, incuding late nite barbecue and full darkness badminton . Hey surprise – the more you drink , the more you miss your shuttlecock ;.) Great night again – and another pack of people to come back to .
Off the Elbvalley up the mountains east of Dresden : The Elbsandstein-Mountains. Writing these lines, I sometimes wonder where all the firwork of good, new experiences comes from in such short terms of riding- but yes:  There´s more to come. Not only the intense landscape with zigzagging montainroads, that sometimes follow their way back to the Elbvalley, as much as you all of a sudden land in the middle of a Vietnamese Sunday market – and it´s Czech without even seeing a signpost. Travelling gorgeous, greenish valleys that are formed by scenic little creeks inviting you for a spontaneous swim .
Traditioal wooden mountainhouses clearly amrk the differences of lifestyles from Czech to Germany- as scenic they occur- you can literally smell long , cold and tiring winters in this remote areas far off major city centers. 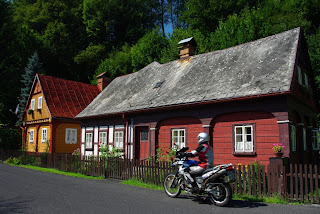 And the “Kasachan road standards” express very obviously, that this is not the place where the money goes. So we enjoyed the friendly czech people, wondered aand smiled about some guy doing his garden work alongside the road fully nude ( well- maybe we were the only vehicles passing there in ages? )

On our way back to Dresden we firts passed a terrific 10 km  mountainracetracklike road  ( well , guess it made us right a bit too fast uín some places - which should turn out to be one of the oldest German mountainracetracks indeed - the former "Deutschlandring" .
As historic it is being  first started in 1912- as much fun this was .

Overlooking the track we passed the ancient Bikers`fortress of Hohenstein - and while we thought how to walk up the fortress I noticed a very special traffic sign at the historic entry gates : "Bikers access  permitted" !!! So you can imagine our big grin riding up the pasway on oru modern steelhorses - to find a bikersshop in the middle of the fortress, perfect places to eat, party and sleep - do not miss neither the racetrack nor the fortress , when you come along. 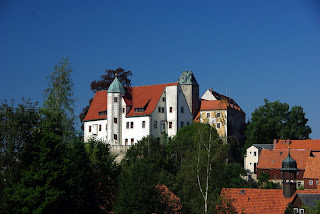 Our way home passed one of the biggest German windparks , growing bigger ever since the nuclear power catastrophe of Fukushima- at least one positiv result of unseen suffering in Japan. 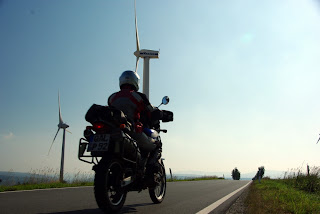 Our way home was planned through the mountains of Thüringen - but blocked by a major coldfront rushing in from Northwest- so we decided for a short but scenic trip back through saxonia and Bavaria - leaving full of new impressions with the firm intention to come back and find out more about the region.

While the alpes get flooded with bikers in the summer months , this is pretty much an insider´s tip to check out. 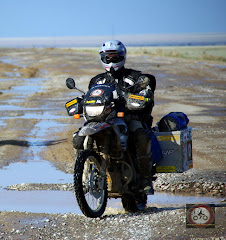